USDJPY Forecast: under pressure but within familiar levels

The Dow Jones Industrial Average briefly rallied over 300 points Monday to hit a record high after President Trump signed the coronavirus relief bill. Late Sunday, President Donald Trump signed the $900 billion relief deal and $1.4 trillion omnibus spending package. Trump said, in a statement, that the Senate would “start the process for a vote that increases checks to $2,000.”

The key number to watch is yesterday’s close at 30313. Taking out 30418 is indicating the buying is getting stronger. Under normal conditions we would be looking for an acceleration to the upside since there is no resistance. But since the volume is expected to be well below average, it could be risky chasing the market higher at current price levels so we’re not expecting an acceleration. A sustained move under 30313 will signal the presence of sellers. If this move creates enough downside momentum then look for a potential break into 29868. The selling could extend even further if this level fails as support.
Keep in mind that the market is likely to move lower faster than it will rally.

Gold prices have been pressuring back to lows of the day around $1870 in recent trade. A combination of risk-on and USD strength has hurt the precious metal.
Gold prices retreated on Monday following US President Donald Trump’s signing of a long-awaited pandemic aid bill, which pushed the gold to a one-week high earlier. XAUUSD was down 1.6% to $1,877 per ounce after rising over $1,900 per ounce during Asian trading hours.
Gold, considered a hedge against inflation, has risen about 24% so far this year amid the unprecedented stimulus unleashed globally.

A convergence of 38.2% Fibonacci retracement and upper band the Bollinger on the daily chart guards the commodity’s immediate upside around $1,882.
However, bullish momentum and trading sentiment, coupled with the US dollar weakness, can help the gold buyers to tack the nearby hurdle. Following that, 61.8% Fibonacci retracement of one-month and Bollinger upper band on the hour play, around $1,890, becomes the key before the $1,900 threshold.
On the downside, 38.2% Fibonacci retracement of one week near $1,875 becomes adjacent support to watch during the quote’s fresh pullback. Though, gold bears are less likely to turn serious unless witnessing a break near $1,868.

The greenback started the week on the back-foot, falling against its major rivals amid ruling optimism. After a post-Brexit deal was achieved on Christmas Eve, investors welcomed news that immunization against coronavirus has begun in Europe with the Pfizer vaccine. The positive mood was later boosted by headlines indicating that US President Trump finally signed the relief/funding bill without amendments.  The USD/JPY pair trades in the red around 103.69.

The USDJPY pair remains neutral in the near-term, with the risk skewed to the downside. Bears will have better chances on a break below 103.15, the immediate support level. The 4-hour chart shows that it’s developing below all of its moving averages, while technical indicators seesaw around their midlines. Approaches to the 104.00 area will likely attract selling interest.

The approval of Pfizer and BioNTech’ coronavirus vaccine by European regulators, in tandem with the UK and EU finally agreeing on a Brexit trade deal, has sent the German benchmark DAX 30 index storming higher in recent days.
The index has climbed over 4% this month to exceed the previous record high set in February. However, investors may be getting a bit of themselves given the nation is currently under strict lockdown measures and is averaging over 19,000 new daily coronavirus infections.
That being said, several health officials have warned that it will take several months for the vaccine rollout to have a measurable impact on the virus. Nevertheless, investors may dismiss these concerns in the short-term and continue to put a premium on European equity indices despite the notable deterioration in local health outcomes.

From a technical perspective, the DAX 30 index looks set to extend its push to fresh record highs, after bursting through key range resistance at 137,80 – 13,840. With the RSI eyeing a push into overbought territory, and the slopes of all six moving averages notably steepening, the path of least resistance seems to favor the upside.
A daily close above the February high (13,829) would probably carve a path for prices to probe psychological resistance at 14,000 and the 50% Fibonacci (14,067), with a break above bringing the 61.8% Fibonacci into focus (14,316).
Conversely, slipping back below the February high could trigger a short-term pullback towards support at the November high (13,447).

Any information/articles/materials/content provided by Capitalix or displayed on its website is intended to be used for educational purposes only and does not constitute investment advice or a consultation on how the client should trade.

Although Capitalix has ensured that the content of such information is accurate, it is not responsible for any omission/error/miscalculation and cannot guarantee the accuracy of any material or any information contained herein.

Therefore, any reliance you place on such material is strictly at your own risk. Please note that the responsibility for using or relying on such material rests with the client and Capitalix accepts no liability for any loss or damage, including without limitation, any loss of profit which may arise directly or indirectly from the use of or reliance on such information.

You should ensure that, depending on your country of residence, you are allowed to trade Capitalix.com products. Please ensure that you are familiar with the company’s risk disclosure. 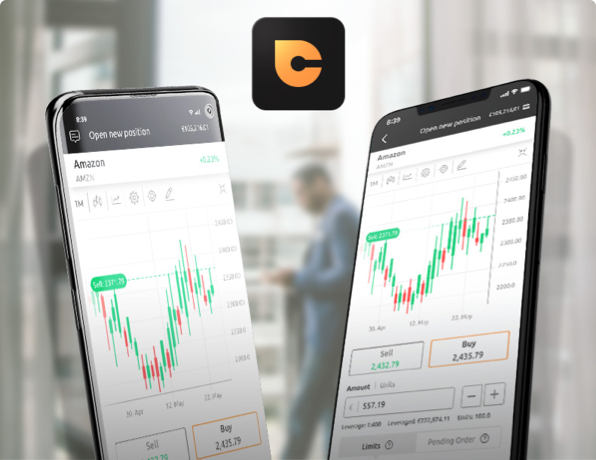 We would love to hear from you!

We’re here and ready to provide expert support. If you have any questions about trading with Capitalix, send us a quick message and a dedicated member of our team will be more than happy to help you.